Just spent a wet and rather wild week in Tasmania – one of the endemic species found down there is this parrot – the Green Rosella. Saw these by the road side, hit the brakes and rushed out – two shots later they were gone. The first picture was not worth the memory it occupied – but I was rather pleased with this one. Splendid birds with a bell like voice. I heard them far more often than I saw them, which always seems strange for such a colourful beast. 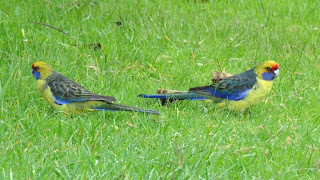 You can find many more images of birds from around the world at World Bird Wednesday. You can see my most recent post by clicking the Paying Ready Attention link on the RHS of the screen.