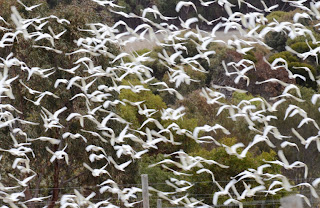 We happened upon the large flock of Little Corella at Kingscote on Kangaroo Island.  They were a bit flighty, and had already been spooked by another photographer (if I sound bitter here, that’s because I was!) 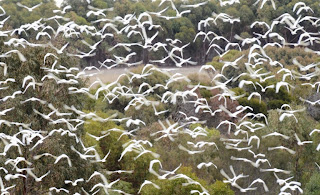 Anyway, when it became clear I was not going to get any ‘on the ground’ shots I pulled back and tried to catch the movement  - and shear noise if that had been possible  – of the birds in flight.
So, this is not like the stuff I put up most weeks, but I rather like it.

You can find more bird pictures at World Bird Wednesday.
Enjoy the birds.
Posted by Stewart M at 18:44