The first day in Oman was not going well - my luggage was taking a short break in Dubai without me, I had been wearing the same clothes for well over 24 hours and the information about registration for the conference was rather misleading.  I was feeling glum!

Then, wandering under the bushes, was a bird that I had wanted to see for as long as I have actually wanted to see birds!  It was a Eurasian Hoopoe (Upupa epops) - 28 cm of pinkish, black and white striped remarkableness!  Long down turned bill, a half cocked crest and long, rounded wings.

I can remember looking at pictures of Hoopoe in my first bird books - the I Spy and Observers books for those of you with roots in the UK - and knowing that I would probably never see one!  It may as well have been a Roc or a Phoenix for all the likelihood that I would see one.  I was half convinced that they were mythical!  Later I met people who had seen them, but they were dedicated beyond my level of commitment, or travellers to far flung and exotic places.

But here it was, being reasonably cooperative on the grass verge around a hotel car park - it felt I bit like finding a unicorn in a shopping centre! After about 2 minutes it flew off into the traffic (!) and suddenly the day did not seem so bad at all.  In fact I dont think I stopped grinning for a long while.  The general feeling was only surpassed by that caused by the eventual arrival of my luggage! 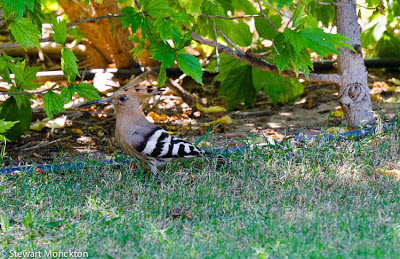 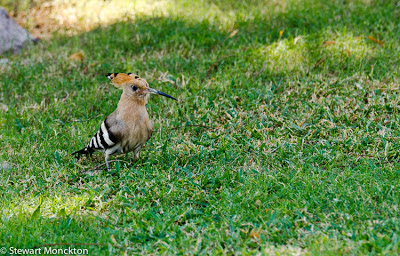 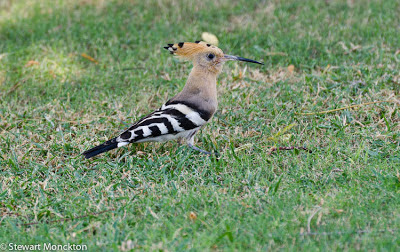 Now it you turn to get involved in Wild Bird Wednesday.

Click on the link below, follow the instructions and off you go!  Don't forget to link back to this page - and its best if you link to a specific post on your own blog rather than just to the blog itself.