The Masked Lapwing (Vanellus miles) occurs over much of Australia except for an area stretching out of Central Australia towards the west coast.
It is a very family bird, often taking up noisy and aggressive residence on sports ovals, traffic islands and farmer's fields.  It will aggressively defend its territory from cats, dogs, other birds and well meaning photographers.
There are two species of the Masked Lapwing found in Australia - Vanellus miles miles and Vanellus miles novaehollandiae.  The subspecies miles a more northern distribution, while the novaehollandiae subspecies in found in the SE of Australia.  The two types interbreed where their range overlaps.
Being that Melbourne is in SE Australia I only see one of these types on a regular basis.
The northern species lacks the black neck and chest stripe of the southern species, and also has a long yellow face mask.
The younger birds in these picture as subspecies novaehollandiae. 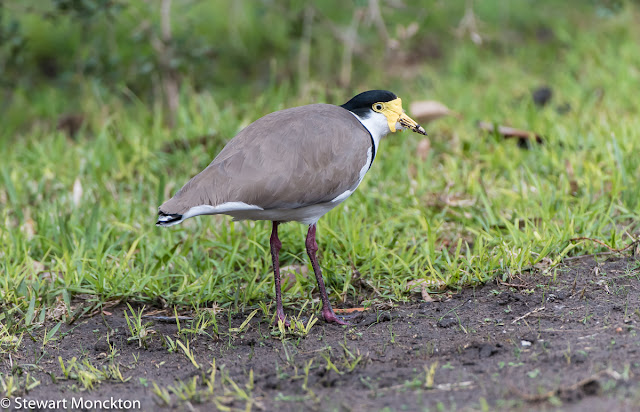 The miles spps was taken in Kakadu national park, the other birds were taken in Victoria - with the young ones being photographed at Point Lonsdale early this year.
As ever, to join in just click on the blue button below.  Hope all is well.  SM

Click here to enter
Posted by Stewart M at 02:30