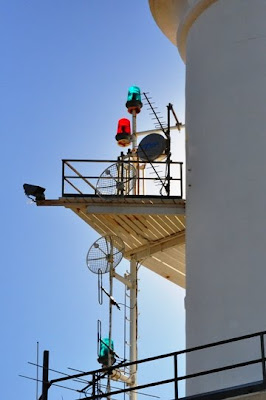 A number of years ago while traveling in the US we met a rather over enthusiastic fellow traveler. We had spent the day near the coast and so had our new companion. We had seen some good birds, some great views and generally had a good time. She had found some beach glass and did not seem to understand how we could have overlooked such a thing.

It turns out that I don’t really remember her or the location of the beach, but I do remember the fragments of glass she held in her hand. They were frosted with age and sand and rounded where they should have been sharp. It was as if the sea had made them change.

The glass covers of the two lights in this image seem to have taken on a clearness and crystal quality that I had not seen before. The connection may be vague, but somewhere in the random wiring of my neurons a connection occurred.

You can find more skies from around the world at SkyWatch Friday.

You can also see the most recent post on my other blog by clicking the Paying Ready Attention picture on the RHS of the screen.

Enjoy the skies
Posted by Stewart M at 20:51