This weeks 52Frames challenge was 'Levitation'.  There was a good deal of talk on the FB page about Photoshop merging methods and such like - also many tips on how to make object float with fishing line and then how to clone out the line.

I am not a purist by any means, but I do tend to take images that are not staged - and I was not keen to take an image that relied almost entirely on post camera manipulation for the desired effect.

So, I tried to think of a situation where a high shutter speed capture of an object would give (at least some) illusion of levitation.  A dart about to hit a dart board came to mind.

I must have taken the best part of 300 to get this image as there were lots of variable that could mess the picture up, with picture taken at wrong time and the dart being well out of focus being the two most obvious.  In the end I ended up with lots of pictures of a bare dart board, and lots of pictures of a dart board with a dart already in it.

But persistence payed off! 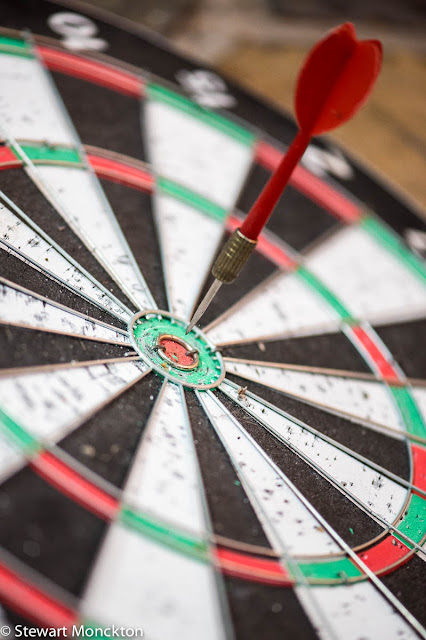