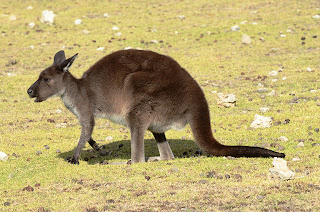 I have just finished reading a rather good book on those most Australian of animals the kangaroo.  With the exception of some parts of Papua New Guinea, if you are looking at a native kangaroo you are in Australia.  Kangaroos and their relatives live (or lived until recent extinction) in all of the habitats of Australia, including the tops of trees! 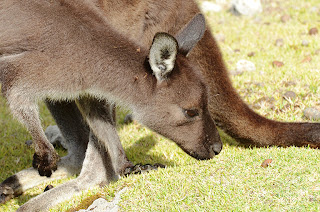 Far from being some form of primitive, backwater, sort of animal they are a superbly adapted animal that deal with the vagaries of the Australian climate far better than the energy hungry placental mammals found in the rest of the world.  It can be argued that people only though they were primitive because of the colonial snobbery that early explorers and scientists brought with them. 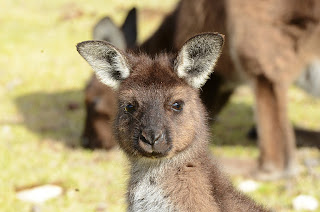 These kangaroos are Kangaroo Island kangaroos – they are a sub-species of the widespread Eastern Grey Kangaroo.   As you can see from the close grazed grass (and all the droppings!) these kangaroos are doing OK here.
So, my contribution to Our World Tuesday is something really very Australian.
Posted by Stewart M at 21:21