Our World Tuesday - The Lizard of Oz

One of the (many) remarkable things about the wildlife of Australia is the number of different species of lizards and other reptiles we have.  At present the count stands at 840 species.  Its frequently said that a typical back garden in Sydney, Melbourne or Perth is likely to hold more species of lizard that the whole of the UK!  I don't know if thats completely true, but I've seen at least 3 types of small lizard in my own garden.

This picture is not of a small lizard!   This is a Shingleback - sometimes called a Sleepy Lizard or a Stump Tailed Lizard.

As you can see this nice specimen was very relaxed and allowed me to get very near him (her?) with a wide angle lens.  I found this lizard on the path to Mt. Zero in the grampians.  There were a number of other smaller lizards out in the spring sunshine - but they were faster on their feet that this one. 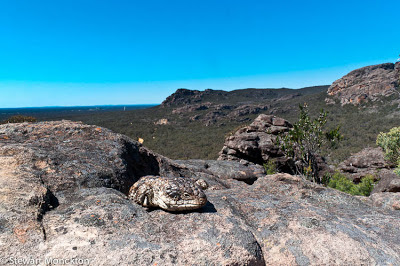 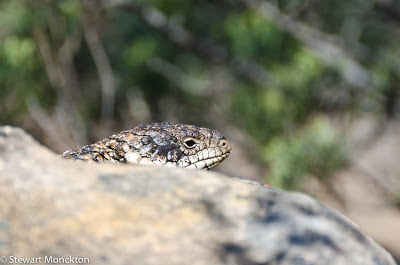 The lizards may not get as much press as the kangaroos and such like, but they are just as Australian.

Enjoy the pictures.
Posted by Stewart M at 19:16