I have mentioned in a couple of my last post that I took a trip around Mud Islands on the Saturday of a recent long weekend.

I tell you more about the trip on my wordy blog - the post will be called Perimeter Walk - but for now I'll just post some of the birds I saw.

At this time of year the Islands were not over populated with birds - but we did find a rather splendid mixed flock of waders at one point.  We normally don't get to see the waders in their breeding  finery - they spend the summer with us, but head back north in our winter to breed.  So most of the time while they are here they are in non-breeding plumage.  (Of course its crazy to call it "winter" plumage as its our summer!)


There were also some Godwit coming into breeding plumage - not that you can tell in this picture!  I think the flash on the leg of the RHS bird is a band / ring.

You can see that I have cropped these two images for effect.  The second of these pictures is not the best in the world - but I have included it because it shows both Banded and Black Winged Stilt.  The banded have an all white head and the adults have a chestnut breast band.  The Black Winged have a black strip on the back of their head.  There have been very few records of either species on the island and the Black Winged is a very unusual record. 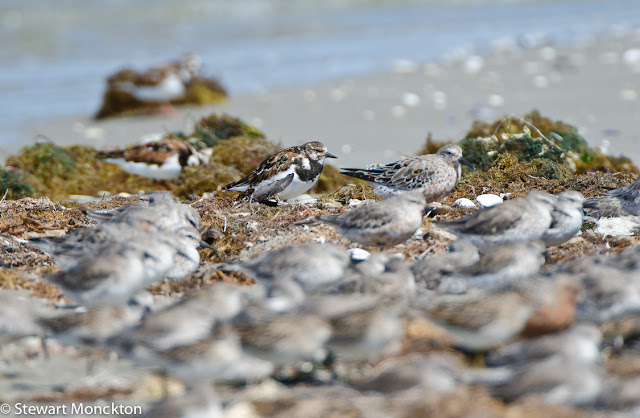 There was a small flock (maybe 5) of Ruddy Turnstone at the back of the mixed wader flock - but they always stayed rather too far away.


There were always pelicans to be seen - the island has a breeding colony at the right time of year.  And as we were leaving a Welcome Swallow perched up to say see you later! 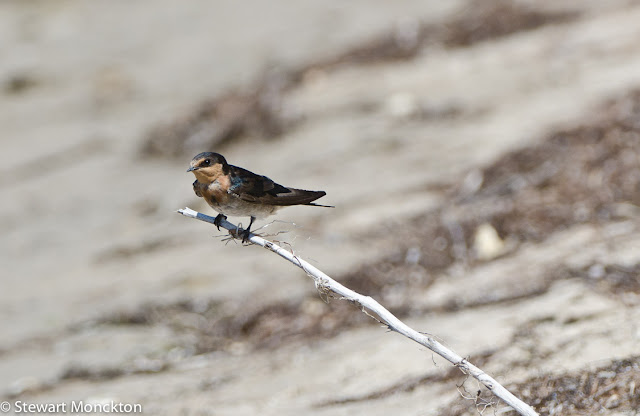 So, all in all a good day.  And I still have a few pictures up my sleeve!

If you have not already done so, you may find a visit to my other blog to be a worthwhile way to pass a few minutes - people have said it's a good read.

But whatever you do dont forget to click the link below to join inWBW!