As you may have noticed I have not been out and about in blogland very much over the last couple of weeks.  This was due to me being on a small island - smaller than many farms I think - in the Pacific Ocean off the east coast of Australia.

Lord Howe Island is an old volcanic island, formed by a 'hot spot' of volcanic activity in much the same way as Hawaii was formed.  It's about two and a bit hours by plane from Sydney - and may well  be the most 'middle of nowhere' place I have ever been.  It also happens to be one of the most remarkable places I have ever been.  There will be a reasonable (read 'large') number of Lord Howe Island posts on this blog in the next few weeks!

This is a bit of a map to show you where it is. 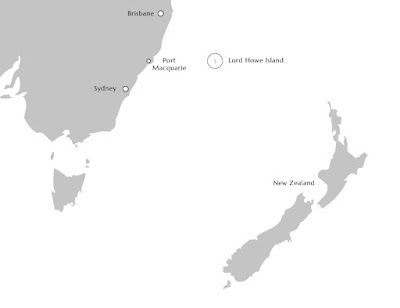 The south end of the island is dominated by two large mountains - Mount Lidgbird and Mount Gower  - with Mount Gower being the highest at 875 m.  Thats only about 100 m lower than the highest point in England, and given that Mt. Gower starts at sea level its a decent days walk!  (More on that to follow)


The pair of mountains are tall enough to form their own weather - and lenses of cloud can often been seen sitting on the tops of the peaks.

In case you had not noticed, this is a pretty special place!

You can find more images from around the world at Our World Tuesday.