I thought I'd go with a bit of colour this week.  Red-collared Lorikeets are very closely related to the insanely colourful Rainbow Lorikeets, and in fact until recently they were considered a sub-species of of Rainbow Lorikeet rather than a full species in their own right.

So, the Red-collared Lorikeet (Trichoglossus rubritorquis) is only found in the wooded areas of Northern Australia.  The first part of the formal name refers to the birds 'hairy tongue' which it uses to feed on nectar and pollen.  This is probably what the birds in the pictures are doing.

These birds were rather distant when I took the pictures, but the images really do show what you can do with a few megapixels and a bit of sensible cropping.  These pictures were taken near the Mamukala bird hide in the Northern Territory.

Although I would have loved to get some real 'screen filler' shots of these birds, I do rather like the way you can see these birds in the habitat. 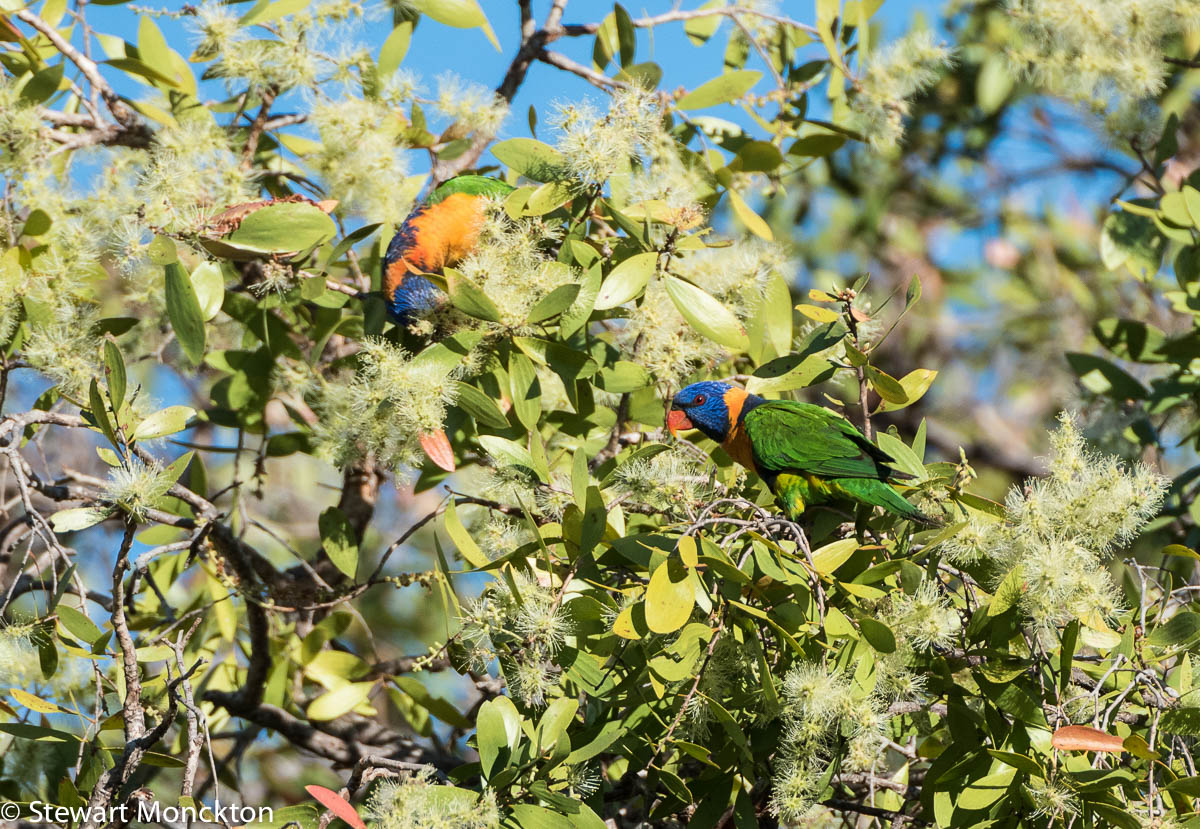 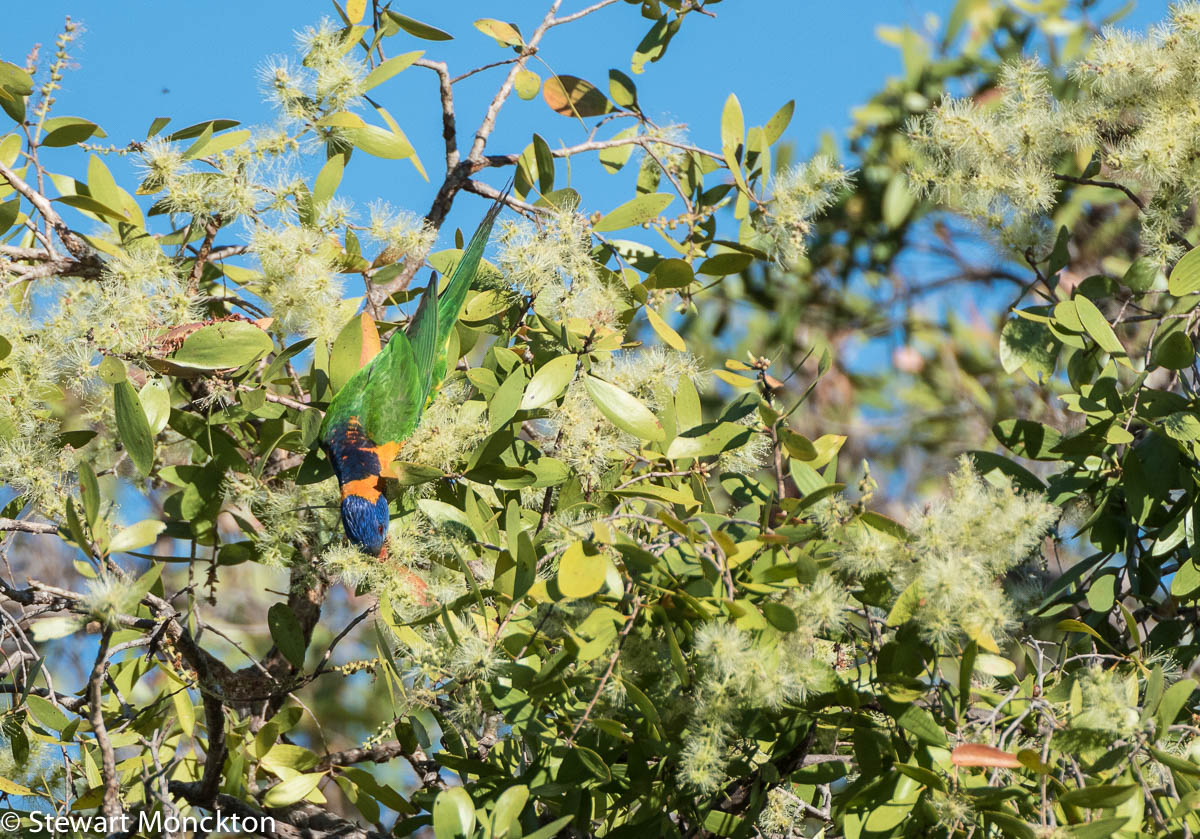 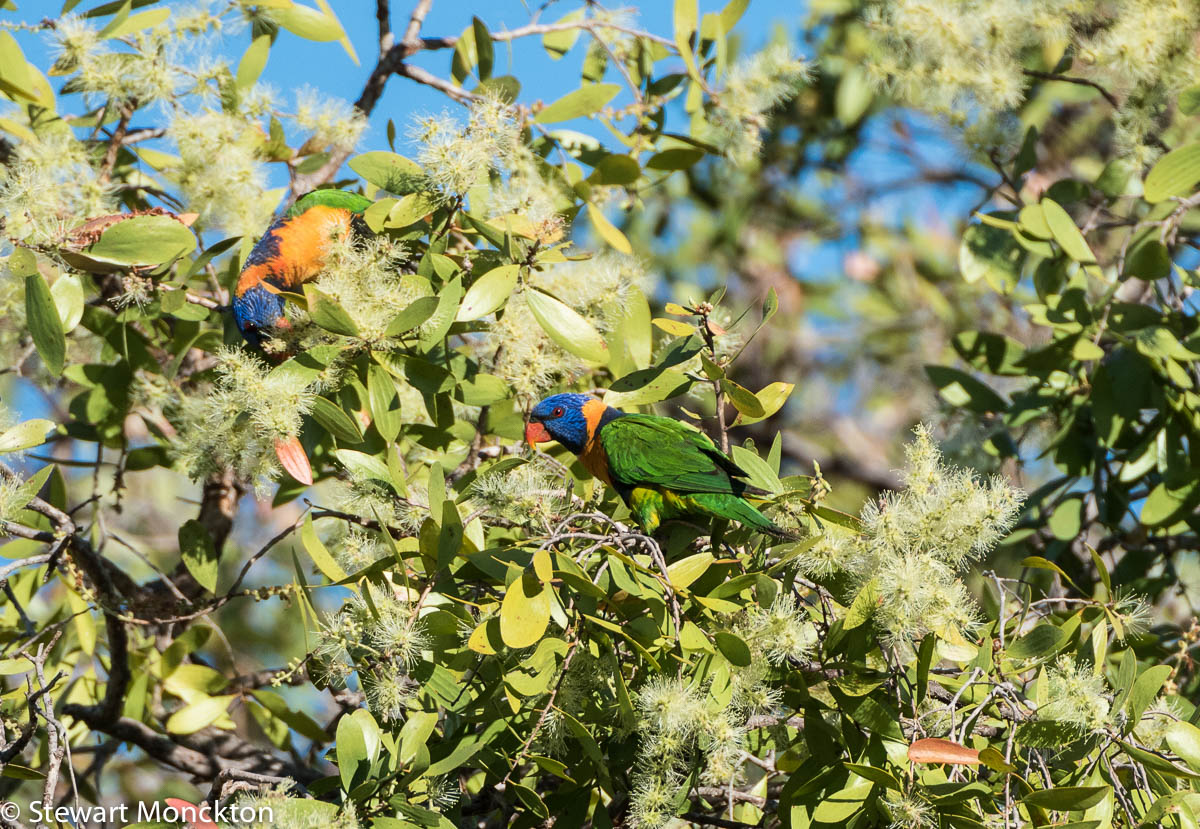 These picture really do need to be looked at in 'full screen' mode, which will happen if you click on the image.

Now its your turn to join in with 222nd Wild Bird Wednesday by clicking on the blue button below.  SM

I did see the Rainbow but not this one I think. Good to see.

Seeing these beautiful birds in their habitat enhances the experience.

You are so lucky, you have some beautiful birds in Australia. Great shots, cheers Diane

I really need to get to Australia or stop reading your posts :) I can't wait to see all these birds you keep introducing us to.

What a pretty bird! Good choice.

Great photoso of the Lorikeets and they certainly look similar to the Rainbow ones I see around here all the time. Thanks for sharing.

Colorful and beautiful. I am all in favor of a good crop as I don't have the greatest zoom lens in the world and yes, it works well, as you can see. I wonder how many different colored parrot types there are. It seems like you have shown us many and never had to repeat yourself. I have also seen them on other posts and then there is the Parakeet variety which has many different colors as well. Just that group alone is mind boggling. I think I will probably never live long enough to see all of the birds of the world, but I will come close to seeing pictures of all of them at WBW :)

So I am thinking maybe you didn't see my post on your 200th post celebration ... seems like you were traveling to Scotland when that occurred. My doctored header was part of that post and I have to agree that maybe a new header would be fun ... if you have time :) Stay well, Stewart ...

Andrea @ From The Sol

What bright beautiful birds! Thank you so much for hosting each week (even though I've been away for a while).

Quite a nectar feast in that tree. Beautiful birds!

Well camouflaged aren't they? Beautiful birds and great shots. Thank you for the reminder to enlarge the photos. Always lovely to see the details.

They weren't working hard to make your job easier, were they

What an amazing looking and colored bird, Stewart. Thanks for sharing and hosting this meme. I'm back on blogger and hope to have new birds to show on my posts. Greetings Jo

Hi Stewart. What is amazing is how these apparently vibrant and colourful birds blend into their surrounding so well. Nature is truly remarkable.

Stewart, nature’s camo. Thanks for sharing.

The red-collared Lorikeets have some stunning plumage. Loving the backrop of the blue sky!
Have a wonderful week :)

Beautiful , colorful birds..Are the related to Parakeets? Great shots..I don't think I have any feathers to share this week..

Hello Stewart!:) Great shots!:) I always click to enlarge, and what beauties the Red-collared Lorikeets are,... they have such gorgeous colours. As they are green and blue with only a touch of red/orange in their plumage, they blend in so well with the foliage. Good for you for spotting them, and thank you for this beautiful share, and also for hosting.

Gorgeous birds! It must be springtime down under!

They are so beautiful -- and I really enjoyed seeing them in their habitat -- easier to imagine how we'd spot them if ever were lucky enough to be there.

Great shots of the Lorikeets.

They are very similar to the Rainbow Lorikeet.

they are so colorful. love their blue heads.

We have many of the rainbow lorikeets here. And I once was the cook/chef in a restaurant called "Lorikeets"...and on the dot of 5 pm every day, without fail, had to go outside and feed them. If I didn't do so, they didn't hold back in reprimanding me!!

Thanks Stewart. I changed my post. You are right. I googled him. What an odd duck. Or in this case frog. I wish the one at Busch Gardens would have opened his eyes. Birds are so amazing.

While I like to see a nice portrait of things to see the details, I'm a fan of including habitat with pictures of critters and birds too. Good job. It's always a treat to see birds from places that I may or may not ever get to visit.

I wish we had such beautiful birds here in Kentucky :)

Such gorgeous birds, Stewart! Their colorful feathers would be a treat to see.