The Crested Tern can be found all around the coast of Australia - and I would not be surprised if it was not the main cause of "I've just seen a funny looking seagull" comments from huge numbers of people yet to join the fellowship of birders.

The Crested Tern is a little more cooperative than many birds, often allowing people to get reasonably close to them before they take flight. These birds were all part of a breeding colony on Mud Islands in Port Phillip Bay.  As you will see, most of the chicks were well grown, although some had not yet taken to the air.

This bird goes under the scientific name of Thalasseus bergii - which means Bergius' Fisherman.  The fisherman in obvious, and Bergius is the name of the "short lived" German collector who collected the type specimen in souther Africa.

In some books this bird may still be called Sterna bergii - which means Bergius' Tern.  Recent studies of the DNA found within the mitochondria of this birds cells resulted in the bird being moved from one genus to another to which it was more closely related.  This shows a nice little rule of taxonomy, where the second part of the name follows the bird about, even if the first part changes.

These birds are about 44 - 48 cm long, with a wing span close to 1m.  Like most terns they are a delight to watch in their grey, white and black washes. 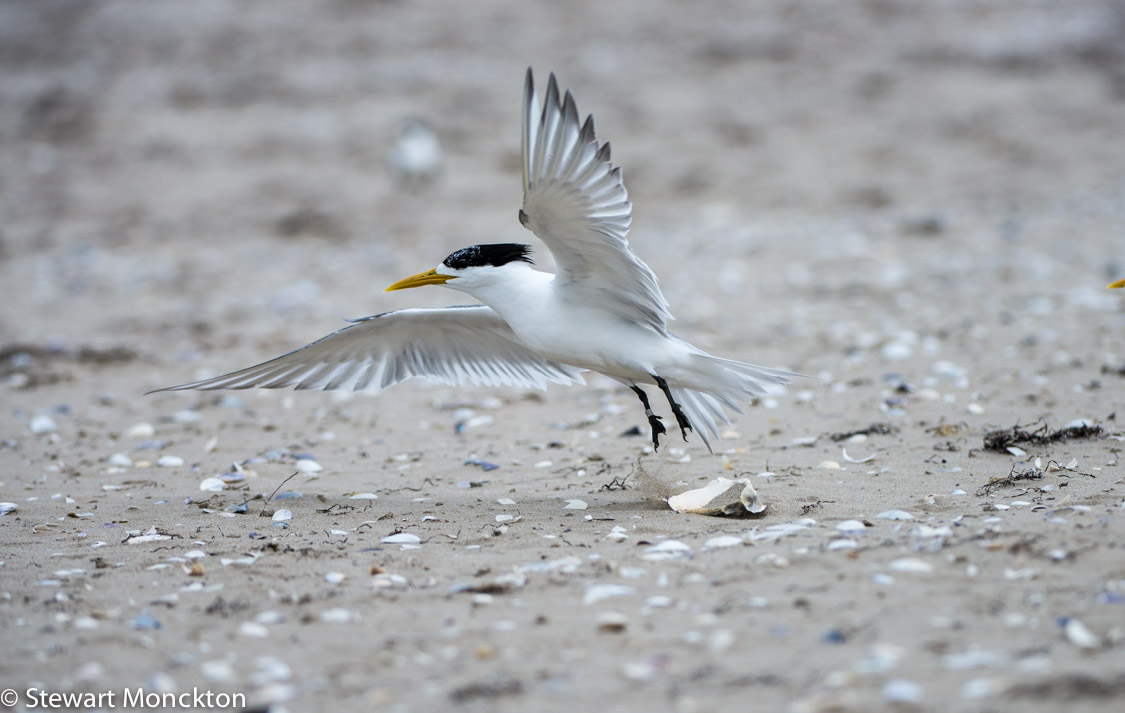 I think this is my favourite image of the many I took.  As the bird is banded there is a remote possibility that I had this bird in the hand as a chick.  Apart from the bird, I like the puff of sand  caused by its feet as it pushes in the air.

I have a real fondness for these birds - in the afternoon of the first day I arrived in Australia I took a walk along Swan Bay pier  and saw some of these birds.  This makes them a prime candidate for being on of the first birds I added to my life list in this wide brown land.

Now it's your tern (!) to add a link.  Feel free to spread WBW through what ever networks you have - the more links the merrier.
Posted by Stewart M at 02:00